The History of Mothers Day is slightly different for each country that celebrates it. I discovered that over 100 countries celebrate this day on the second Sunday in May, but how did it all get started?

I could not find the origin of it all (probably since time immemorial!) but did find out how it all began in Australia and the USA. It's a certainly worthy day to make handmade greeting cards for.

The History of Mothers Day in Australia 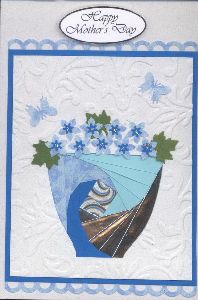 I hunted up the Australian story for this day and found that a kind woman named Mrs Janet Heyden really started it all in 1924 when she began to seek out lonely and forgotten Mothers (Mums) living at a special home called the Newington State Home for Women.

In those days, mothers without husbands could not support themselves, so homes were set up for them and their children were placed in orphanages and foster care.

It is unbelievable in this day and age to think it happened on such a scale, but so many Mums were indeed very lonely and forgotten in the early 1900s. Gifts and cards made for them would have brightened their days. 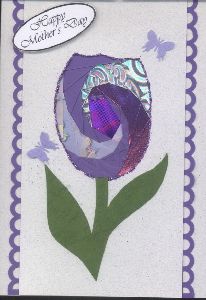 I do not know what motivated her compassion, but Mrs Heyden was a caring person. She brought gifts to the lonely and forgotten mothers and encouraged school children, local businesses and even the Mayor of Sydney to donate to her cause.

The day rapidly and regrettably lost much of its earlier meaning and became commercialised. It is not a declared holiday in Australia either though many families celebrate it. 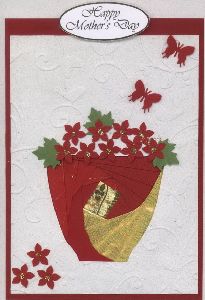 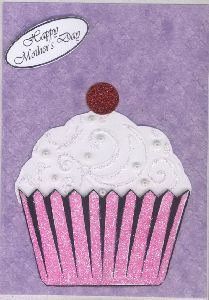 In the USA, the current history of Mothers Day commenced in 1908 because of Anna Jarvis. She wanted a day set aside to honour Mothers. When Jarvis was 41 years old, her mother died. On the second anniversary of her mother’s death (the second Sunday in May 1908), Jarvis made public her plans to establish a day to honor mothers.

President Woodrow Wilson liked her idea and agreed to make it a national holiday in 1914. It did not take long for the holiday to become commercialised in the USA as well, to the point where Anna Jarvis actually withdrew her original support of it! The officially recognised holiday has persevered though.

Celebrating this day can cause objections in many people. The main objection to Mothers Day seems to be its commercialisation.

It is a wonderful thing to have a day to honour mothers all over the world, so by making handmade greeting cards and gifts and contributing to the Cards for Troops drive, you will be helping to keep the spirit of true Mothers Day alive.

Who Made these Iris Fold Cards?

A person who understands the true motive of Mother's Day is the wonderful Ronell from South Africa. Not only is she a regular contributor to PaperCraftCentral, she is also a regular contributor to the Cards for Troops drives. At Christmas time she sent me a lovely big package of handmade cards for the Troops, and a soldier's mother wrote in to say how much receiving one of her beautiful cards meant.

It doesn't get much better than that. 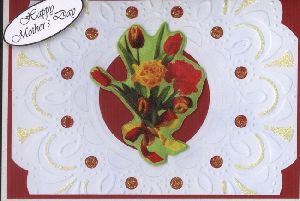 Ronell has let me know that there is a package of gorgeous Mother's Day cards on their way to me. She sent me some photos of these cards, many using the iris fold technique. It's great to have advance images of the lovely cards. I can keep the images even after I send Ronell's cards off to the Troops! 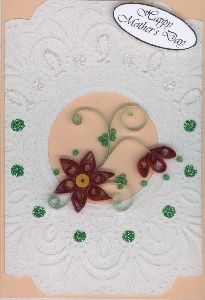 Other compassionate women have also been busy making Cards for Troops in honour of Mothers Day. Lovely Church ladies I know have held special meetings to spend time making cards to keep the true history of Mothers Day alive and let our Troops know we appreciate them and what they do.

You can see samples of their cards on the Cards for Troops pages.

If you liked this page, you might also enjoy reading about the Alzheimer's Fundraiser or finding out how to run a Craft Auction to help fund raise for causes.

If you are still searching for a handmade cards for a cause group, try searching Create to Donate.